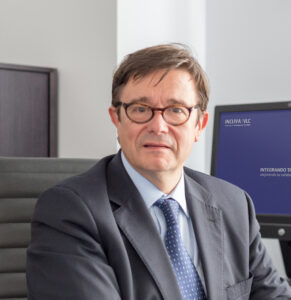 Appointed by the Board of Trustees on the proposal of the Governing Board, its functions are set out in article 20 of the Statutes.

Ultimately responsible for implementing and coordinating the entity’s scientific and economic policy as determined by the highest governing body.

Serves an ex officio member of the Governing Board and Board of Trustees.

In accordance with the statutes, its functions are:

Dr. Andrés Cervantes was appointed general director of INCLIVA on 9 May, 2017.
He is Full Professor of Medicine at the University of Valencia.
His training as a resident medical intern took place at the Hospital Clínico Universitario of Valencia. After completing this residency, he obtained a predoctoral fellowship at the Free University Hospital in Amsterdam, where he obtained his Doctorate in the laboratory of cellular pharmacology, with work on multidrug resistance.
Professor Cervantes is Head of the Oncology Service of the Hospital Clínico Universitario of Valencia.
His areas of interest and research are gastrointestinal and gynaecological cancer, as well as phase I trials and new drug development.
As a clinical researcher in rectal cancer, he has published several papers on the quality of multidisciplinary work as well as on evaluating the quality of mesorectal surgery, how to optimize initial therapy choices and especially, how to treat cancer of the upper third of the rectum.
He has written more than 350 articles and reviewed papers published in different journals. He is also an editor of the journal Cancer Treatment Reviews.
He is president of the European Society of Medical Oncology (ESMO).
He is an associate editor in the gastrointestinal cancer section of the journal Annals of Oncology.